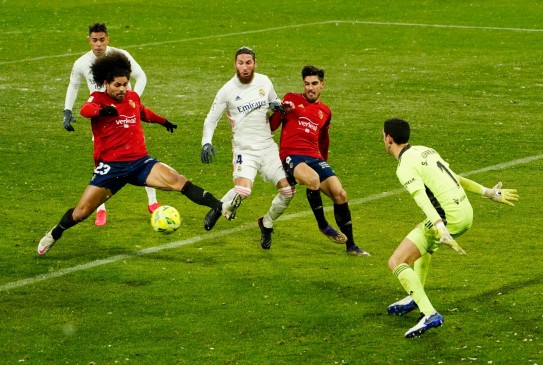 Real Madrid's players were finally in a position to leave Pamplona on Monday after being stuck on the Spanish city for three nights as a result of weighty snowstorm that hit the united states over the weekend.
The team flew right to Malaga, without time for their homes in Madrid, to get ready for Thursday's Spanish Super Glass semi-final against Athletic Bilbao.
Madrid's players found its way to Pamplona on Fri because of their La Liga video game against Osasuna on Saturday, which finished 0-0.
But the dreadful weather conditions meant travel links were disrupted and they were unable to come back to the administrative centre either after the video game or on Sunday.
Real Madrid departed on Mon morning and landed on Malaga, where they have a light work out on Monday night, the to begin three sessions prior to the game on Thursday.
However the preparation is far from perfect for Zinedine Zidane's side, whose attract against Osasuna meant they missed the opportunity to overtake Atletico Madrid near the top of La Liga.
Zidane complained about the talk about of the pitch in the El Sadar stadium, in which a light dusting of snow made taking part in conditions difficult.
"For me this is not a football meet," said Zidane, who was simply convinced the fixture must have been called off.
Goalkeeper Thibaut Courtois criticised La Liga for allowing the overall game to just do it. "They have to realise that footballers happen to be humans," stated Courtois. "We travelled to the stadium with the motorway deep in snow. You have to consider people's safety. All of us have family members who worry about us."
Academic institutions were closed throughout Madrid on Mon, where between 20 and 30 centimetres of snow fell on Saturday, the heaviest snowfall in metropolis since 1971.
Source: Thedailystar - Sports