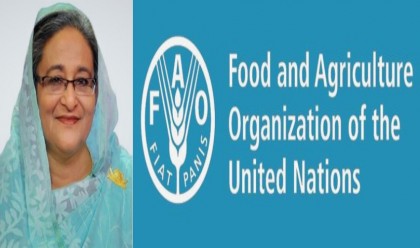 Qu Dongyu, Director-Standard of the meals and Agriculture Company of US (FAO), has highly appreciated the leadership of Prime Minister Sheikh Hasina found in attaining food reliability for 165 million persons of Bangladesh despite appearing one of the top 10 10 virtually all populous countries in the world.
He shared his deep appreciation throughout a ceremony marking the display of Letter of Credence by Md Shameem Ahsan, Bangladesh Ambassador to Italy, accrediting him as the Everlasting Representative to FAO held in Rome recently.
"We may learn a whole lot from Bangladesh because their solutions are very economic, simple to adapt," explained the FAO Director-General.
Ambassador and PR Ahsan thanked DG Dongyu for acquiring the credentials and in addition for sharing his candid examination on recent attainments of Bangladesh.
He assured fullest support to the leadership of the DG to help make the organisation better, transparent and inclusive.
Recognising FAO's precious contributions to Bangladesh on food and nutrition security, food safeness, agro environment, small holders farm efficiency and income increase over the 40 years through several programmes/projects and even during the challenging period of Covid-19, Ambassador Ahsan valued FAO because of their active support to build up the agriculture sector transformation approach in Bangladesh.
While thanking the Director-General to nominate Prime Minister Sheikh Hasina as the Co-seat of the "One Health Global Leaders Group on Antimicrobial Level of resistance (AMR)", Ambassador Ahsan underlined the initial location of Bangladesh to play a leading position regionally in raising awareness and actions to address AMR.
Permanent Representative of Bangladesh also briefed the Director-General about the responsibility Bangladesh has been bearing going back 4 years giving shelter to at least one 1.1 million forcefully displaced Myanmar nationals (Rohingyas) on humanitarian ground and deeply appreciated FAO for supporting persons in Cox's Bazar to boost their livelihood and supercharge agricultural productions, assisting little holder farmers because of their elevated income and capacity creation.
Mentioning about the 36th Asia Pacific FAO Regional Meeting (APRC) scheduled intended for 8-11 March 2022 in Bangladesh, the Everlasting Representative invited the Director-General which he recognized.
The function, held on a zoom platform, ended with the reiteration of assurances by both Bangladesh and FAO to interact closely in the coming days to eradicate poverty and hunger around the world.
Manash Mitra, Economic Counsellor and Alternate Everlasting Representative to FAO and Sikder Mohammad Ashrafur Rahman, Counsellor and Head of Chancery, were present on the occasion.
Source: Observerbd - Bangladesh